Let's Walk Around Your Head

I'm going to try and give a (brief) guided tour of your brain. I can comfortably say that I am vastly under-qualified to talk about it. So bear with me please, forgive my mistakes, and go grab a cup of strong coffee.
Ready? Good, lets go.

The brain is an organ which serves as the command centre of the nervous system in all vertebrate animals. Typically the brain is located in the head, usually close to sensory apparatus such as eyes, ears, and nose. There are exceptions in nature such as in dinosaurs which had secondary brains in tails however it's fair to say these are outliers.


The brain is by far the most complex organ in any vertebrate's body.

It is composed of four key parts. The Spine, The Hindbrain, The MidBrain, and the Forebrain. 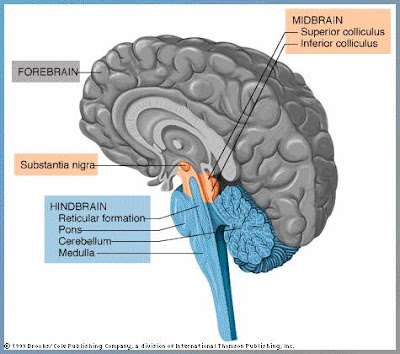 The brain sits atop your spine which has nerves radiating out through your limbs controlling movement and also receiving sensory information throughout your whole body. Working down from the top of your body, are the brain itself, the brain-stem, and the spinal cord which runs down your back. If you're reading this you're probably aware that damage to your spine or your brain is to be avoided as it will impact your abilities, in some cases permanently. While brain tissue can regenerate it is famously fragile and reluctant to do so. Wear your seat belts and helmets.

Next, coming from your brain throughout your head are your cranial nerves (named after your cranium, or skull). These are the main information super highway for key senses such as vision, hearing and taste. Again, protect these at all costs - avoid boxing.

The brain itself is divided into several key areas,


There are also peripheral nerves radiating out from your spine down your arms and legs, through to your hands, and feet, receiving touch and of course providing and controlling the impulses of touch and movement. These are known as voluntary nerves, as they can be controlled and directed at will. Complementing these are of course the nerves which power your lungs, for breathing, your stomach for digestion, and your heart. For obvious reasons you don't want to have these systems shut down while you sleep, they are autonomic - meaning they carry on performing their tasks without conscious effort.

When I explain the brain to people I always like to start at the base and work up. Put a hand on the back of your neck and move up the back of your skull until you feel a hollow. Behind your hollow is your Pons, Medula Oblongata (great name), and your Cerebellum. This area is called your 'hindbrain'. 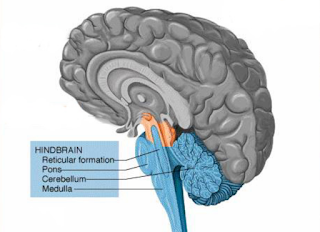 It is the most primitive part of your brain and was the first to evolve. Our best guess from fossil records is appeared in worms over 500 million years ago.

It provides breathing, heart beat regulation, balance, basic motor movements and foraging skills. Think of it as the survival and starter kit for animals. Neuroscientists call it the proto-reptilian brain. It manages the critical functions we need for homeostasis.

Pons means 'bridge' in latin, and actually used to be called pons varolii after the italian anatomist Variolus. Highlighted in blue this region of the brainstem lives up to its name by containing neural pathways (or tracts) which pass signals from the brain down to the cerebellum and medulla and also tracts which passthe sensory signals up into the thalamus.
It's about the size of your thumb, with two pairs of stalks in the back called cerebellar peduncles. If you follow these along lead to both the cerebellum and also the midbrain.

The pons contains tightly packed bundles of neurons (called collectively nuclei) that act as a bridge for information from the forebrain to the cerebellum. These nuclei don't just pass information but are also responsible for sleep, breathing, swallowing, bladder control, hearing, equilibrium, taste, eye movement, facial expressions, facial sensation, and posture. A good Pons can make all the difference on a first date.

Two important nuclei (a nuclei, in neuroscience means a group of neurons which are tightly bound together and form a centre for processing) within the Pons are the sub-para-brachial, and also the medial-para-brachial. These centres control the change from inhalation and exhalation. Meaning while a great Pons lets you breathe easy, a bad one will literally take your breath away. It's also responsible for sleep paralysis (stops you from flailing around) and fmri research shows it plays a role in generating dreams. Pons is pronounced like Fonz.

This video will give you a good overview of the whole hindbrain.

Next time: The Limbic System (Where raw emotion is forged)